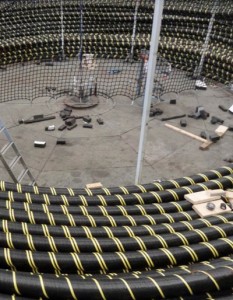 We successfully managed the installation of array cable and export cable between the 230 MW windfarm, comprising 73 Vestas V112 3MW turbines.

We were initially contracted to provide submarine cable engineering to the export cable installation package. We were asked to also take on project management in 2013. The assignment was expanded in 2014 to encompass array cable burial and further expanded to include 60% of the array cable laying, substation cable pulling and export cable tail installation. The project was completed in 2015 and ongoing work also includes Offshore Transmission Owner (OFTO) transfer of the export cable to Balfour Beatty, which is expected to take place in 2016.

More information can be found here